In order to convert a loc to 6090(x), your loc must normally be fitted with a drum-commutator.

It IS possible to get all the advantages of the 6090(x), even if you have an older loc, who use :

What you need is a permanent magnet which can replace the electromagnet, that the loc is fitted with.

The magnets from the HAMO-locs, are just what you should use.

A comparison between the two magnets (62K)

the loc. However I have encountered several instants where the 220450 cannot be fitted, unless

If you concluded that the 220560 are the magnet you should use, then let me tell

you that there is an alternative to the 220560. It's a stronger magnet, and it consists

The 7558 magnets are smaller than the normal magnet, so a spacer of some kind is

needed. I have made one in balsa-wood, which is soft and can be pressed to fit.

The spacer just need to fit, and be non-magnetical. From my experience with the

7558 magnets, I can say that the performance is a bit better than with the normal magnet.

The locomotives run a bit smoother.

your hand, and they will stay there !. The magnet look very similar to those which can be bought

from Conrad. They look very much like them (small and round) but i don't know how strong

the ones from Conrad are.

BUT, I found these magnets to be almost too strong. At low speeds the motor frequently stalls

because the magnets almost "locks" the anchor. They seem to work better in large locos, because

of the bigger momentum, but in small locos its not that great.

So maybe there are such a thing as a too strong magnet.

Of course you start of by buying a magnet and a decoder - The decoder would be the 60901.

You could also by the 60902, which is the decoder ONLY. This way you don't have

to pay for a magnet you don't use.

Start by unsoldering the wires from the existing decoder/direction changer and the electromagnet.

Now simply mount the magnet, where the electromagnet used to be, - It should fit perfectly. 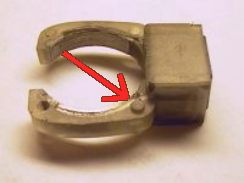 In case you want to convert a loc using a SFCM(220450), I have made a couple of pictures of that.

one of Märklin's smallest locomotives. The pictures only show how

But as I stated before,

IT SHOULD BE POSSIBLE TO CONVERT ANY MÄRKLIN

LOCOMOTIVE AS LONG AS YOU CAN FIT THE DECODER !

It may be necessary to cut the small plastic dots (look at the picture) smaller or cut them away, in order

to fit the 220450 on very old locos. You shouldn't worry about cutting the dots, as the two screws are

enough to hold the magnet in place. I have tried cutting the dot smaller by cutting a bit off from 4 sides,

so the round dot becomes a small square dot. But be aware that milling may be required to the motor-

shield in order for it to fit over the magnet.

Back to main page