In the past whenever something had to be lighted, we have used yellow LEDs(Light Emitting Diodes),

as a substitute for white light. But now white LEDs are available. We can finally get rid of those

Unfortunately the new LEDs are not 100% white ! , they have a small blue shade, which is more

notably in pictures than in real life.

As a conclusion the white LEDs are far better than the yellow ones.

I have taken some pictures of these white LEDs in use, and I have to apologize for the sometimes bad quality.

So what can these new white LEDs be used for. Well they are very bright and can be used

for lamps, spotlights and other things.

Here is what I have used the LEDs for.

DSB MZ, and some of their other locs.

The yellow LEDs are on a small PCB, which are easy to remove. On the PCB there is 3 yellow

LEDs and 4 diodes. Pictures of the PCB can be seen here : Top-side - Bottom-side.

The schematic is as follows :

You now remove the 3 LEDs and the 3 normal diodes (the ones who are in series). I actually only

removed the outer 2 as the remainder is then left unconnected.

yellow LEDs. It should be connected as this schematic describes : 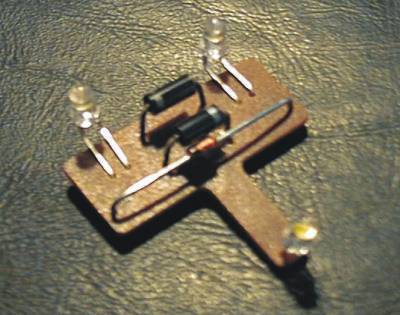 The value of zener diode and the resistor, can be changed, but I found a value of 470 Ohm/5W for the

resistor and 3,3 Volt for the zener to be OK. You can also put 4 or 5 normal diodes in series instead

of the standard 3 - but it may be hard to fit them.

The resistor should be connected to the "PCB-connector" on right side of the driving direction.

The resistors and their connection can be seen here.

Here are some pictures to show the result. Again, be aware of the sometimes bad picture-quality,

and the fact that the light from the white LEDs looks more blue than they really are.

Back to main page
If you have a question about anything I have written, then send me a mail